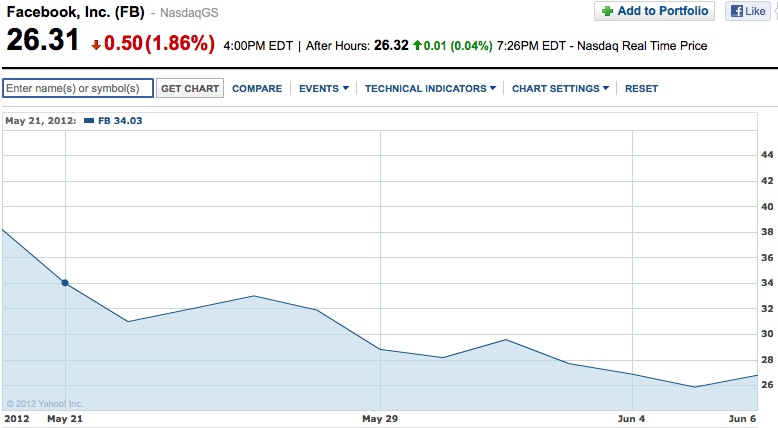 I’ve written before that I’m a FaceBook bear; never having bought into the hype that built around the stock. I wrote that I wouldn’t touch it with a 10′ pole.

Since that time, the valuation of the company is starting to come back to levels that are at least in the realm of consideration for investment. I believe a fair price is around $15/share – but irrational exuberance is in play so if it even kissed $20, it could be an attractive investment opportunity – if not for some of the baggage the company is toting around.

Meanwhile, much has been made of Facebook’s “failed IPO.” This is missing the point entirely, the company went public to raise money. The company clearly maximized their opportunity to do so by offering more stock and at the high end of the offering price. So by that measure, it’s hard to call the IPO anything but a win because the maximum funds were realized from the IPO.

The trouble with the NASDAQ on day 1 of trading was certainly unexpected and unforgivable. The fact that FB management selectively notified potential investors before the IPO was probably legal, but definitely was unethical. That gives a clue to investors right there, if you weren’t notified, you’re the sucker at the poker table so to speak. And unfortunately, these are the investors who stand to take a loss, not the company or the investors who offered their shares during the IPO.

Even with the baggage, if you were an investor who liked Facebook at $38/share, you’ve got to love it at $26/share. I remain a FB bear. Where I hold an ownership interest in a company, however small, I expect and demand ethical and transparent behavior from company executives. FB management, in the IPO process, has proven lacking in that area.