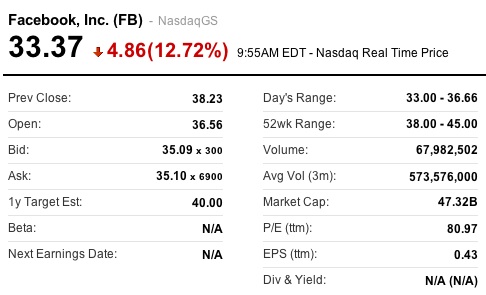 All you have to do is read the S-1 to see that Facebook is a viable and valuable company. The negative sentiment that surrounded the public offering of shares in the past few days is not because the company lacks value, but rather because the value at which the company is being offered does not reflect the risk levels or growth expectations of investors who might reasonably purchase those shares.

Which begs the question, what is a fair valuation for Facebook?

With nearly one billion users, one could argue that Facebook’s user growth is for all intents and purposes complete. Could the user base double again? Perhaps it’s technically possible as more users become available globally, but would you rate it as likely? No. And will it will match the user land grab that has happened in the first decade of the company’s existence? Not likely. That means this measure of growth becomes far less interesting when thinking about value.

What about ARPU? (Average revenue per user) This is an area where Facebook can and will grow revenue. Which means that the metrics an investor should be looking to understand include users, active users, loyalty, churn, alternatives, and ARPU growth per user.

The company states that its active user base is 900 million users as of May, 2012. But does the company’s definition of active user really translate into a valuable and loyal user? For example, I have (and have had) a Facebook account since 2006. I was an active user until 2008. I will show up as an active user in Facebook’s metrics because I do login at least once in a 30 day time span, typically to check the status of a family member prompted by a nag email. An ad impression is generated that I don’t view or click. As a user, even a long standing user, what am I worth to Facebook?

That being said, the AOL-effect is in full swing right now and it wouldn’t surprise me if 100 million Facebook users are truly active, engaged, and for now, loyal users. If Facebook could move the ARPU for this subset of users up, and I believe the team can to some extent, then the company can realize the kind of revenue growth that investors covet. It’s an execution and timing task.

All this being said, subscription models are interesting to watch. Remember the go-go 1990’s and 2000’s where mobile phone companies were all the rage? That was because of the subscriber land rush. Once the rush is over, ARPU becomes predictable and it’s hard, barring some dislocation like the iPhone, to move the model once the subscriber (read Facebook user) rush subsides. This is normally where high valuations come back toward the mid-point.

If you believe that the management team will find new ways to monetize the existing user base (hard) and goose revenue and earnings you’re probably pretty happy with the present valuation. You may wait for a dip like today to purchase shares and profit as Facebook executes and increases ARPU.

If you believe that expanding ARPU is a tough proposition and that the real value was created by the user (subscriber) land rush of the past few years, you’ll believe the company is over valued and will wait for it to drift back towards earth before considering it as an investment opportunity. Something more in the $20-$30B range vs. the roughly $90B valuation of this moment.

Personally, I’m a Facebook bear (I hold no position and do not plan to open one, long or short or derivative) in that I believe the earlier private investors have harvested the near- and mid-term value from the stock. Furthermore, I believe increasing ARPU is a tough road, particularly on a “free” product where fickle users can easily bolt to other “free” alternatives as popularity wanes. Already, the “cool” kids are not using Facebook and that’s a trend I see accelerating which will erode the active user base making it even more challenging to grow the company profitably.

But, I could be wrong. And there’s no doubt that there is value in the company and who knows what is possible given the law of large numbers?

What’s your take on Facebook valuation and why? Comments are open…