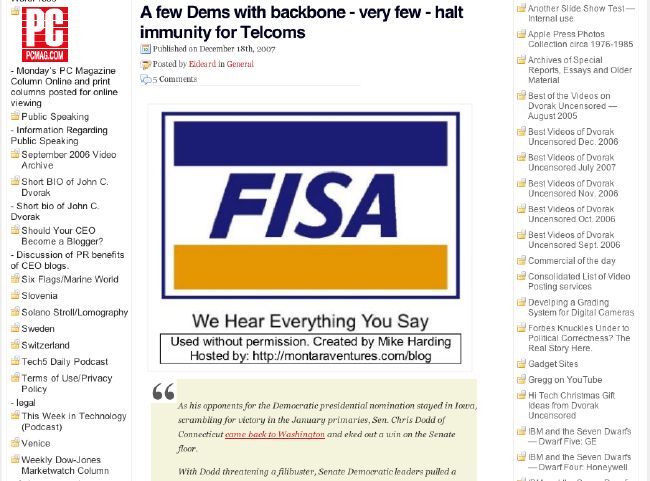 Here’s the scene of the crime on John Dvorak’s (PC Magazine) blog.

I’m glad they liked my work, but wished they would have a) given attribution and b) not had the audacity to use my bandwidth in the commission of the theft. Come John, you’re in the biz, you know better than this. BTW, here is the original entry that the image appeared in from August, 2007…

For the record, if they’d even asked me, I would have given consent. It’s not like my email address is hard to find.

Updated 5:30 PT: I was mildly irritated by this today and left a comment. Now I’m pissed. They’ve modified the image, are still using it without permission, and have deleted my comment protesting the action. ValleyWag now has posted on the matter – Thanks!

What’s next Dvorak? I posted another comment – the next contact from me will be more “formal.” Your move…

Updated 7:00 PT: Dvorak.org has now stopped using my image. But, I haven’t heard anything from them directly. No apology, nothing. And, they’ve deleted a second comment on the matter which is even more disturbing. I’ll post screenshots of my comments a little later. Disappointing. I’ll be looking for an entry where they fess up and apologize. It’s the internet, these things are cached and don’t go away. I’m thinking a letter to John’s editor is in order. After all, the difference between mere bloggers and highly paid and widely read journalists is supposed to be ethics.

9:30 – I notice my server getting buried by requests from dvorak.org. I check out the source, they’ve hotlinked an image that I created for a story in August. No attribution. Shortly thereafter, I modify the image on my site to have a footer that says “Used without Permission. Created by Mike Harding. Hosted by https://montaraventures.com/blog”

I’m offline for awhile to deal with life, when I visit the entry again at 4:00pm my comment has been deleted. This is what I see: 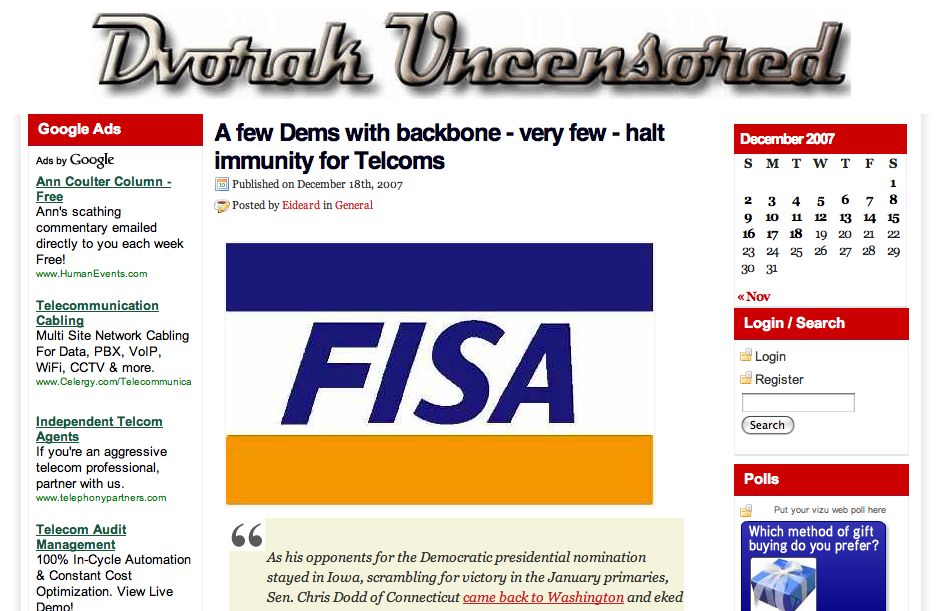 Now, no attribution, hosted from their site, and the footer I added earlier removed. Outright Theft! 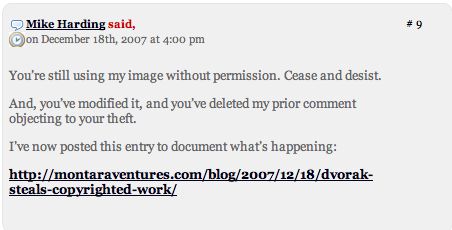 19:00 – I check back, the image is now taken down, and my second comment has been deleted. They’re now trying to “erase” the evidence. Alas, caches and screenshots make that darned near impossible. I post this comment which I fully expect to be deleted the next time I check: 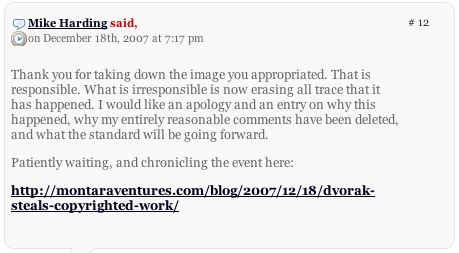 I’ve also written an email directly to Mr. Dvorak asking him if he even knows this is happening (which he may not since a number of people seem to be involved in the site.)

Now, a reasonable person might say, “What do you want?” They’ve taken down the image, it’s done. Yes, but, if it’s happening to me, it’s happening to others. I want an acknowledgement, explanation, apology, and a statement of policy that it won’t happen again (not to me – to other IP creators.) I’m patiently waiting.

Update: Dec 19: I’ve gotten two responses from Mr. Dvorak, both of which I’ll share in an upcoming entry. One threatening legal action for slander by calling him a thief in the title of this entry and one as a defensive tome saying hotlinking is not illegal (and he’s right it’s not, it’s annoying, but legal) – the issue is the appropriation of the image without attribution multiple times. Which does amount to theft.

Update: Dec 19 – 16:30: Dvorak has answered on his blog. I’ve retorted here since comments are closed on dvorak.org.

Update: Dec 19 – 18:30:I now consider this issue closed. I believe this was a mistake on the part of dvorak.org and I apologize to Mr. Dvorak for the pejorative title of this entry. See the comment thread of this entry if you’re interested in the resolution. The larger discussion is still interesting I think and insightful opinions (i.e., not Norm who commented below) are welcome.


Submit to StumbleUpon or give thumbs up.