Here’s something interesting you may not know: when harvesting oil, there is often “waste water” mixed in the substance coming out of the hole, frequently the water is under pressure and hot. While at the Stanford Geothermal Conference last month, Mark Milliken covered this information during his talk. 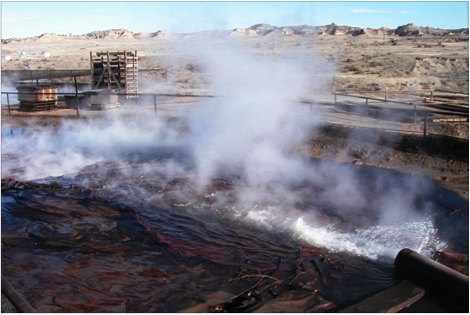 The Naval Petroleum Reserve #3 is really part of the Department of Energy’s Rocky Mountain Oilfield Test Center. As such, it’s not bound by the economic realities of having to produce or else and can experiment a bit with new drilling techniques as well as ponder the question: “what should we do with all this hot water?” 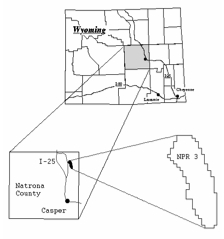 At this particular site, some 6.4 million liters (1.7M gal) of 87Â°C (190Â°F) water is discharged per day as part of their oil production. This water is routed into a cooling pond and then released into Little Teapot Dome Creek when the water has cooled sufficiently. Curiously, the amount of oil produced from this activity is around 48,000 liters (12,600 gal) per day. As you can see, far more water is produced per day than oil! The raw power equivalent of this water is estimated to be 22MW, or enough to power some 25,000 homes per year. But, a small fraction of that raw power is available for harvest with existing technologies.

Where does all this hot water come from? The water is hypothesized to come from the Big Horn Mountain range where it soaks into the earth and descends to a series of hot rocks. It then migrates to the Powder River Basin and pours into fissures in Ten Sleep and Madison Limestone layers where it is extracted during petroleum operations. The heat map below will provide some context for how the NPR #3 site fits into the overall estimated heat flow at a 3km depth. 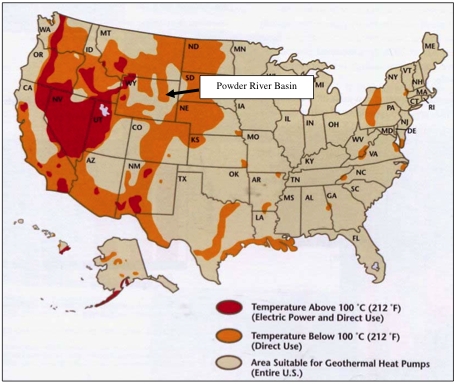 Using binary systems to extract the heat from this water could easily yield a couple of hundred kilowatts in a binary generation scheme. These units need around a 50Â°C (120Â°F) difference in temperature between the ambient temperature of production and the resource. It would seem likely that this could be established and maintained at this site and many others. It’s interesting to see this type of exploration underway and it could provide additional benefit (both ecologically and economically) to take advantage of this “free” by-product of an existing activity.