Well, the entry on the Rose Bowl was so widely read and enjoyed so I thought I’d follow it up with an NFL version. This was all kicked off by my assertion that the NFL has become unwatchable product.

Disclaimer, due to a service interruption in my video, I missed the final one minute 31 seconds of game time, so it’s not quite the full game. Nevertheless, with 58 minutes and 29 seconds of playing time plus pre-game and half-time, it’s likely that the percentages hold for the entire broadcast. It was a mind-numbing 166 minutes of elapsed time with no aid of DVRs etc.

The game in question was the Indianapolis Colts vs. Kansas City Chiefs broadcast on NBC January 6, 2007. A word about the game, Indy has a defense? Apparently so. The Chiefs were held without a first down until late in the 3rd quarter. The Chiefs defense did well to hold the point total to 23, Indianapolis offense did enough to win, their defense performed very well. The Chief’s offense, well, was flat out offensive. It was one of the worst performances by an offense at any level I’ve witnessed. Indy won the game 23-8. For the record, I’m not a fan of either team.

A word about methodology and terms, I watched the entire available broadcast recording the number of ads (dedicated air time for a product/service/company >5 seconds) and the number of plugs (spots/mentions/images/product placement <5 seconds) with the advertiser name and a category. Additionally, due to the way NBC chose to present replays, there is a subcategory of plug called the fast plug where the image is a 1 second blast of logo plus sound. This is important because each replay was preceded and followed up by one of these fast plugs. The data was recorded in time sequence while watching the game and like the Rose Bowl, I've chunked it down and analyzed it to make it a bit more digestable.
This was the longest 2.75 hours of TV ever watched. Boring game, overload of ads, continuous flashing of brands. Ugh. Now on to the data.

The broadcast ran 166 minutes including pre-game and halftime. The game was supposed to start at 1:30pm PT according to the programming, but actually kicked off at 1:40 meaning there was 10 minutes of pre-game content/ads. There were 80 minutes of dedicated ad time in the programming, amounting to 48% ad time and 86 minutes of content accounting for the other 52% of programming. Within the 86 minutes of content time, there were 218 plugs (142 of which were “fast plugs”) – or a plug every 22 seconds. This is exclusive of the scoreboard crawler/ticker which was nearly continuously displayed with NBC and NFL logos.

Even backing out the fast plugs, the NBC logo with accompanying sound at the start and finish of each replay, there were 76 “regular” plugs in the 86 minute content time meaning there was a plug every 68 seconds. A total of 63 distinct advertisers paid for the ads, plugs, and fast plugs in this 166 minutes. Now wonder my brain was jello by the time this broadcast was completed.

The top 10 overall advertisers were: 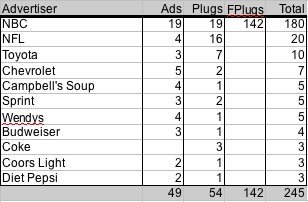 You can see that NBC (with or without the fast plugs) was the top advertiser. Interesting, I wonder if that’s by design entirely or if they were having difficulty selling ads? I doubt that it would have affected the plugs or fast plugs much, but having the broadcast network as the top overall advertiser seems odd, I’d think the spots would be worth more than the promotional value for new NBC shows and other sports events. The top Ad count and Plug count don’t look substantially different than the top 10 overall, here they are respectively starting with top ad count: 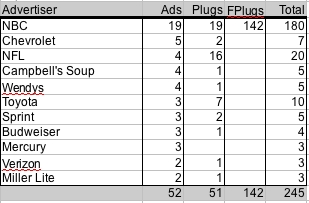 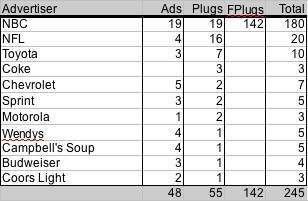 As with the Rose Bowl analysis, I also dropped each ad/plug into a category. That shows another dimension of what’s being thrown at you when watching these games:

Setting aside the media category, there is much more balance in the categories for the NFL game than witnessed in the Rose Bowl. The media category still accounts for a 44 count when fast plugs are backed out making it the highest count category.

The roster of advertisers with counts follows:

An interesting mix of companies with NBC properties leading all categories. There are a couple of advertisers in there I can only believe are local based on the San Francisco Bay Area broadcast area. The vast majority are national spots though I believe. Unlike the Rose Bowl, I can’t point to any particular ad that stood out in the neverending parade of advertisements. Perhaps the NFL contest commercial to go to the super bowl is the only exception, though I can’t remember what they wanted you to do to enter the contest.

As with the Rose Bowl, automobile/truck manufacturers dominated by quarter. Fords were one quarter, Chevy’s another, Toyota was halftime, Lincoln/Mercury another, and Nissan had a shot or two. There was less beer advertising that I expected in this particular broadcast. Beer and trucks were the advertising fuel driving games in my memory – they were there to be sure, just not in the proportions I would have expected.

Well, if you’re tired of watching sporting events because the ads have overpowered the content, you now have data. It’s nearly 50/50 content ads on traditional advertising fronts and when plugs and product placement are included, they get you even with DVR technology. I can’t ever imagine watching an NFL game other than perhaps the Superbowl as a social thing. I won’t ever watch another college football game without my trusty DVR. Even so, it’s clear advertising is evermore present in the content rather than being segregated into specific advertising slots. The one distinct advantage the NFL has over college is that the game pace does seem faster. I think that has to do with better officiating and clock rules.

I believe the data supports my earlier assertion that the NFL is unwatchable. That conclusion is subjective, but the data does demonstrate that the broadcast has become a long commercial with periodic breaks for the game.


If you liked this entry, Digg It!
OSU plays for the national championship TODAY!
Ohio Stateâ€™s 2006 record: 12-0 Next up: Florida 1/8/2007
Tune: My Torture by Esthero
Technorati Tags: NFL | Advertising | Unwatchable | Mike Harding Blog