On the small Carribean island of Montserrat, the volcano that has been active since 1995 sent a plume of ash and smoke ~9 km (5.6 miles) into the atmosphere. Since the volcano came alive, about 50% of the population has quit the island. Nearly half of the land mass is an exclusion zone that is there to keep people safe from just this sort of event. 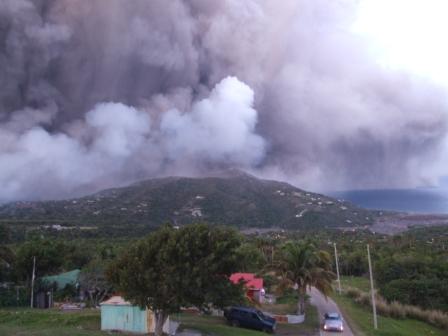 Here’s a description of the event from the Montserrat Volcano Observatory:

The event onset was recorded on the MVO seismic network at 05:54. Between 06:05-07 there was explosive activity audible as far north as Woodlands in Montserrat (seismically better described as “jetting”; 3 distinct pulses were recorded ). The rising ash cloud was visible from all over Montserrat moving out to the WSW south of St Georges Hill and Garibaldi Hill.

Pyroclastic flows travelled down Gages Valley and Tyres Ghaut into the head of the Belham River Valley simultaneously suggesting source high on dome directly behind Gages Mountain. At 06:15 the largest pyroclastic flow to date flow entered the Belham Valley, reaching as far as the edge of Cork Hill, a run out distance of around about 4 km. At 06:25 the ash cloud was reported to have reached 30,000 ft.

Between 06:20-06:25 seismic activity began to wane and by 06:30 seismicity had returned to just above background, dominated by isolated PF signals (extended duration rockfall signals, none or which was especially large, and definitely not suggestive of a collapse) and small long period earthquakes. Pyroclastic activity in Tyres Ghaut continued at higher levels than recent days over the next approx. 1.5 hours establishing an almost regular 7 minute cycle. The run out distances of the individual flows were limited to 1-1.5 km, and each flow was preceded by a minor pulse of ash venting.

At about 08:20 a short period of rumbling/roaring preceding pulse ash venting.

By 09:30 seismicity had returned to background levels.

Pyroclastic activity is ongoing on the NW sector of the volcano with small flows in Tyres Ghaut, run out distances up to 1.5 km.

Low-level ash and steam venting continus from a vent high up on the western side of the lava dome.

Fortunately the prevailing wind carried ash out to the WSW at lower levels ( < about 15,000 ft) and at higher level to the ESE, so northern Montserrat remains unaffected by any significant ashfall frm this event. Preliminary observations of the dome suggest that very little material has been removed, although the dome about the head of Tyres Ghaut appears to have been eaten back to form a chute, possibly making it easier for large volumes of dome material to enter Tyres Ghaut (and Belham Valley) during future events. The alert level remains at 4