« Which Super Villain are you?
» USC Song Girl Moon

I posted an entry in the past couple of weeks stating that NFL Football games were now unwatchable product due to the over commercialization witnessed while viewing a game on tv and that over the course of the holidays I would view a pro game and college game with an eye toward ad to content time.

Well, I’ll get the pro game this coming weekend with one of the playoff matches (loosely equivalent to a bowl game.) Yesterday, I watched the Rose Bowl from purported kickoff time until the final second. Straight through, no DVR magic, just watched the game and the ads. (And, I’ll never EVER do it again – even for the NC game with Ohio State next Monday.) Well, aside from the NFL game TBD next weekend (I simply cannot wait…)

First, a word about the game. USC came to play. That team will be scary good next year if it can keep focus. Michigan didn’t show up, didn’t make adjustments, and got blown out. Sad. Really. One has to wonder how long Lloyd Carr can continue to close seasons, even 11-2 seasons, with 2 losses to Ohio State and UM’s bowl opponent. It was clear that USC said “OK, we can’t run on you, but we can pass on you” taking a page from the Nov 18th game and proceeded to slam the Wolverines. Now, off to what this post is really about, the actual nuts and bolts of the broadcast.

As previously stated, I watched the game from alleged kickoff time to the final second. I recorded each instance of an advertising opportunity and divided them into ads, greater than 5 second dedicated airtime for a product/service/company and plugs, less than 5 second mentions visible, verbal, or product placement. I recorded the name of each advertiser as well as the ad type serially throughout the broadcast. Last night I broke the raw data down into a few easier to digest chunks. Advertisers were separated by brand rather than company, i.e., Pontiac, Cadillac, and Chevrolet were held distinct rather than rolling into a General Motors category as were ABC and ESPN.

The entire broadcast ran 232 minutes (not including post game content as I just didn’t have the stomach for it.) The first thing to note is that if you tuned in at kickoff time, you got 33 minutes of pre-game content and ads. That leaves 199 minutes of actual linear game time including halftime. Of the 232 minutes, 78 were dedicated solely to advertisements, or roughly 34% of the time was spent in ad land. There were 95 specific advertisements sponsored by 42 distinct entities.

Of the 154 minutes of content time, we still had the spectre of ads with a continuous ABC logo in the bottom right hand side of the screen, and ESPN scoreboard in the top left of the screen, and an ESPN crawler across the bottom of the screen. During the content time (before and after ad time in particular) we were exposed to 112 different plug instances (you might not have even noticed them if you weren’t really looking, but trust me, they were there.) These plugs were sponsored by 23 distinct entities.

For those of you who are keeping score, yes, that is 207 ad opportunities in 232 minutes of broadcast with 35 distinct advertising breaks (not counting the continual logo, scoreboard, and crawler.) The Rose Bowl was sponsored by Citi this year, and you knew it with 37 plugs and 6 ads. The top 11 overall advertisers during the game were: 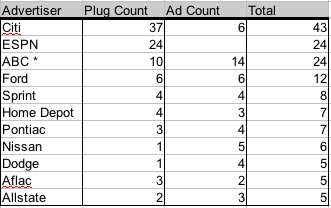 The top overall pluggers were: 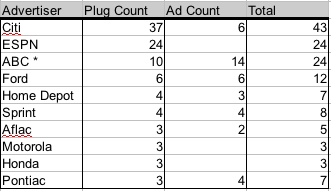 The top overall spenders on traditional ads were: 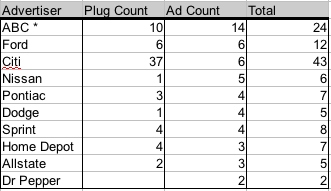 Those only tell part of the story, but I find them interesting. Another great look at this is a cut by category. I simply dropped advertisers into self-defined categories. Some were judgment calls, I put ESPN in the Media category but it could have been Sports for instance. Here is the breakdown by category: 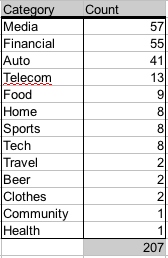 Notice that the top 3 categories constitute 75% of ads and plugs, the 10 other categories combined make up the remaining 25%. It’s clear that Financial Services, Autos, and Media are paying the freight on the game, and viewers have no choice but to take note with the mindnumbing repetition.

The overall count of advertisers with ads and plugs follows:

As you can see, there are around 50 distinct entities sponsoring the 207 opportunities during this broadcast. The top advertisers spent a bundle and got a bunch of exposure.

Other things to note, Honda got 3 plugs, I don’t know it they were intentional or not (I’d bet intentional,) but there was a huge Honda sign hanging in the Rose Bowl which was panned or zoomed to 3 times in the second half. You’d think that the top advertisers would make the largest impression on a viewer (me) paying close attention to the entire broadcast, not so much. I can’t remember much about what the top folks were hawking.

The two most memorable ads for me were the Taco Bell and Dr. Pepper ads, they were somewhat distinct from the crowd. Now I don’t go to Taco Bell or drink Dr. Pepper and neither ad will change those facts, but I do remember them. One Cadillac ad had some cool old cars I hadn’t seen before, I remember that one kind of (still won’t buy a Cadillac…) And one Nissan ad stuck with me a bit as guys watching a football game on a DVR (like I was wishing I was) fast forwarded through the football content to get to the Nissan ad – clever. But I don’t remember the product in the ad. As for Citi, Ford, ABC, and ESPN, if I never see another ad for any of them it will be too soon!

Well, that’s all on this one. I’ll post what I discover about the NFL next weekend and then perhaps compare and contrast them in a third entry if I have the time. It’s always interesting to see how another industry functions when closely examining it. As I stated in the earlier post about the NFL being unwatchable, college football is not far behind. In fact, I’d say it’s right there. Except for my next experiment, I will NEVER EVER watch a game on television again without DVR capability to breeze through the ads. I’ve got another entry cooking on DVRs too…but I digress.


If you liked this entry, Digg It!
6 days until OSU plays for the national championship
Ohio Stateâ€™s 2006 record: 12-0 Next up: Florida 1/8/2007
Tune: Broadcast by Archetype
Technorati Tags: Football | Advertising | Broadcast | Mike Harding Blog


« Which Super Villain are you?
» USC Song Girl Moon