Struck down by an angry deity 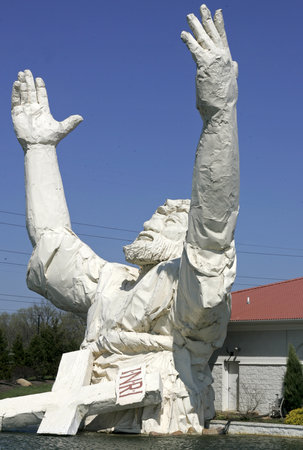 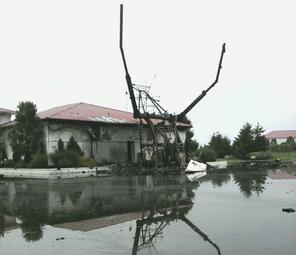 Last night, god sent a sign to the faithful in Southern Ohio by striking down the graven image that was built alongside the interstate using the traditional means of supernatural communication, lightning. See the before and after images to the right.

If you’ve ever driven by the horrendous representation, you’ll know why the deity felt the need for this correction and hopefully the church goers there listen to their god…..Of course, that would be if you believe those sorts of things. Read all about it here.

Generally speaking, 62 foot tall steel structures do have a certain affinity for lightning and one presumes no investment was made in the lightning rod to stave off this foreseeable disaster. But that would be rational thought. Could it be that it’s simple coincidence that this particular structure was lit aflame by nature, rather than an all seeing, all knowing being? Nah, that’s impossible, everything happens for a reason. Ha! We’ll see what the faithful believe. Coincidence? Rebuild. Sign from god? Do not rebuild.

The upside in this is the humor. The downside in this is that these folks will build something even more grotesque to replace it…..let’s hope they forget the lightning rod this time too. For now, goodbye and good riddance touchdown jesus.