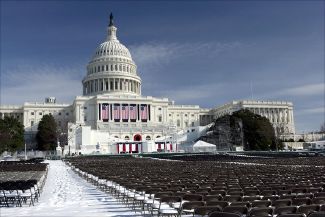 Well, it’s here. The inauguration. And while I’m very excited to have regime change at home (of the orderly sort) I fear this entry will rain on many people’s parade (so to speak.)

It’s clear our new President is bright, driven, and capable. He has admirable views and challenges us to be better people. I like that, very much. However, I think that many are losing sight of three vital facts about the man and the situation:

What to take away from all this? Mr. Obama’s inauguration along with the seating of the new Congress gives us a chance. Let’s hope we don’t see it frittered away. Hope was the platform that got you into office, let’s see it translated into meaningful and pragmatic action in foreign policy (end the wars,) energy policy (let’s give up foreign oil,) and economic policy (fix the basic problems of overspending on things with zero benefit.)

Now that you’re taking the mantle, I will be every bit as hard on you Mr. Obama as I have been on your predecessors. The free ride is over. Now, convince me that we really need to spend $825B more…..I wish you well selfishly, because I’d like to wish us all well. Good luck, you’ll need it.