Welcome Stumblers! I hope you enjoy this entry – if you like it please give it a thumbs up, hang around a little bit, and check out my other content. We have a very easy RSS subscription to keep you in the loop. Thanks for dropping by and I hope you enjoy your visit.

It has been a crazy season thus far, and it is likely only going to get crazier in the next few weeks leading up to bowl season. So as a thought exercise, how would you redesign college football if you had a blank page? That’s all this is, a thought exercise as the chances are slim to none (focus on none) that such an exercise will come to pass. But it does make you think.

The first thing that I thought about is, what absolutely would you not want to lose from the current situation? Here’s what I thought:

All this being said, there are some things that are definitely broken badly and do need to be fixed to ensure that competition is even and that championships are decided on the field, not via the opinion of fickle pollsters and crippled computer rankings. Here’s what needs to be fixed:

There are some other attributes of other sports that should be implemented as well: scheduling should happen only the year before, the bottom x teams each year should be demoted to the next league down, and the top x teams from the lower league should be promoted. Currently, there are over 900 teams participating in college football in Divisions I-A (I know the new name, it’s stupid and I refuse to use it,) DI-AA, DII, DIII, and NAIA. The teams I’m most interested in are the 120 DI-A participants. Let’s face it, it wouldn’t be challenging to sub-divide those teams into a 64 team “upper tier” and a 64 team “lower tier.” In fact, such an attempt might look something like this for the “Upper Tier”: 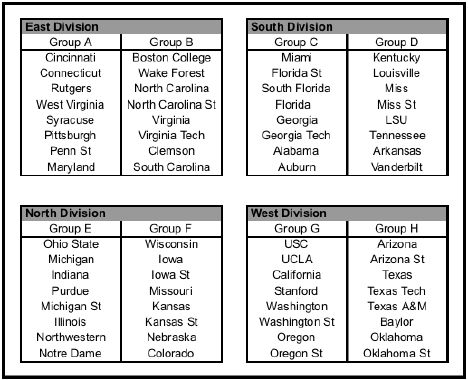 As you might expect, there would be some rules associated with the new alignment:

I’ve heard alot of these ideas before, but I thought it was interesting to bring them together into a cohesive approach. All this being said, it’ll never happen. But wouldn’t that be cool if it did? The regular season would still matter. Rivalries would still rock. Schools and networks would still make money. And a champion would be decided on the field without all the whining and campaigning to determine that this team deserves it more than that team. It’s a meritocracy. And, it’s a dream. But it’s good to dream, no? How would you redesign major college football? Feel free to leave a comment.

If you liked this entry, why not give it a thumbs up?