Welcome Stumblers! I hope you enjoy this entry – if you like it please give it a thumbs up, hang around a little bit, and check out my other content. We have a very easy RSS subscription to keep you in the loop. Thanks for dropping by and I hope you enjoy your visit. 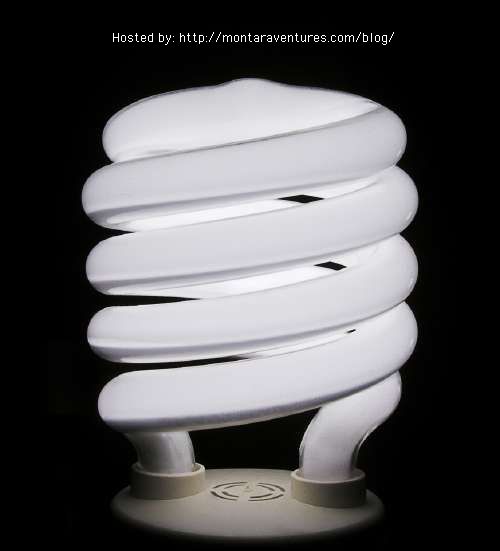 Behold the compact fluorescent light bulb! In June, I took an inventory of the lighting in our household. I was shocked to discover that we had 95 individual light bulbs. 95! Of those 95 bulbs, 83 were candidates for replacement of incandescent with compact fluorescent. When the inventory was taken, not only did I note the type of bulb but also the wattage. A quick trip to Costco later, I set about replacing those 83 bulbs in the course of an hour. Total time invested (including travel and shopping time at Costco) – three hours.

I was able to look at my utility bill and compare it with the same time period last year and with the period this year prior to replacement and the difference was dramatic in electricity billing: August 2006 my electricity bill was $176 and in August 2007 it was $132, a difference of $43 per month. If the last complete billing period without the CFLs is compared to August 2006, it’s a little more. My May 2007 bill was $178 (I replaced the bulbs in June and got some benefit in the month, but I don’t remember the exact date – so May is the first apples to apples comparison and we were on vacation in July, so that’s not a great comparator either.)

I’ve seen many claims about CFLs, but here is cold, hard data. I think it’s understated because it’s summer time and we’re not using the lights as much as we do in the winter months, I’ll keep an eye on that comparison for December through March and will report back. But there are some other benefits I expect as well.

CFLs last 13 times longer than incandescent light bulbs. If that is the case (and we won’t know for some time) then I expect that I’ll realize another $475 on light bulb purchases over the next 7 years, meaning the total benefit is now over $4,000.

And, since we’re using less power, I expect there is an environmental benefit too. Based on actual consumption differences, we’re saving around 200 kwh/month which equates to 16.8 megawatt hours over the next seven years. That means we’ll reduce our carbon dioxide footprint by about 8 tons and our NOX/SOX emissions by about 100 pounds.

Will you get the same benefits I’m seeing? Well your mileage will vary. From what I can uncover, the average US household has 53 light bulbs. If you replace 45 of them, you’ll get a pretty good benefit. Where else can you save big hunks of money and have a positive impact on the environment so easily and cheaply?

Small update: if you’re thinking about mercury issues, please read the comment trail. Also, please feel free to comment, I do moderate (but to control spam, not content.)

If you liked this, why not give it a thumbs up? Tweet