« Just how much geothermal potential is in the US?
» Ecologically sound network hosting

If you wondered why there weren’t more geothermal projects, you’re not alone. One of the more vexing things about geothermal resources is finding them. When compared with other renewable resources it’s a much more challenging endeavour. After all, it’s pretty evident how to determine if a site is appropriate for wind or solar generation by monitoring the wind speed and sunlight in potential site areas. While there is definitely science involved, a layperson can do a pretty good job in suggesting sites.

Geothermal, not so much. There are some obvious signs that a geothermal system is at work, these include volcanos, faults, geysers, hotsprings, fumaroles, travertine deposits, and tufa towers. But none of these indications necessarily mean that an area is productive, just clues that they might be productive. So, how does one “discover” and then qualify a geothermal resource?

The answer is that aside from obvious vulcanism and spewing hot water on the surface, to date, most areas are discovered as an unwanted side effect of another activity, like mining or drilling for petroleum. In other words, geothermal finds tend to be the result of serendipidous accidents or stunningly obvious features observed on the surface. The majority of geothermal resources however are called “blind” resources – that is, there is little if any indication on the surface of the earth that a particular spot might house a geothermal resource. Which begs the question: how does one go about specifically looking for geothermal resources and then qualifying them? Particularly “blind” resources (as most of the obvious surface indicated resources have been tapped or protected – like Yellowstone Park’s geysers.)

At the Stanford Geothermal conference yesterday, there were several approaches to find “blind” geothermal resources presented. Most of these have been around for awhile that are increasingly useful in indicating where one might choose to invest serious money to drill a test well. For those who aren’t familiar with the drilling industry, these holes cost a few million dollars to drill. Thus, you want to be pretty sure you’re in an area that will produce before breaking ground.

Of the approaches including thermal imaging, gravity measurements, magnetic resonance, electrical resistance, and shallow temperature prospecting, the shallow temperature approach seems to be the best tool from my perspective. Effectively, this is a method of drilling 2 meter holes in a grid, measuring the temperature at depth, and factoring the surface trends to get a data set. Mark Coolbaugh presented this talk yesterday of a test he performed in the Desert Peak area in Nevada. The results were impressive and interesting as this is a known geothermal production area – even potentially uncovering further resource in the Desert Queen area.

The way it works is dead simple. A grid is laid out over an interesting area, at periodic intervals (every x meters for instance) a 2 meter deep hole is created with a special, hollow steel drill bit attached to an electric hammer drill. It takes a few minutes to drive this into the ground. Once secured, a temperature probe is dropped down the center of the bit and after an hour passes or so, the temperature is taken. The hour was derived by testing to see how quickly a hole returned to base temp state after digging. Instead of having a few measurements available over a large area with huge costs – even 60M “slim holes” for temperature gradient are expensive – one gets a large number of measurements over the same area.

Driving bit into the ground 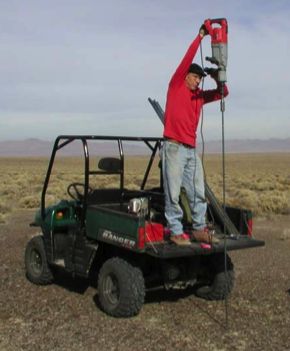 Desert Queen – 9 Temperature Gradient Wells with 2m temps overlayed. Note, the whites are the temperature gradient wells, the blues are “cold” and the yellows, oranges, and reds are “hot.” As you can see, there is an assumption made about the resource size and shape with the contour lines. 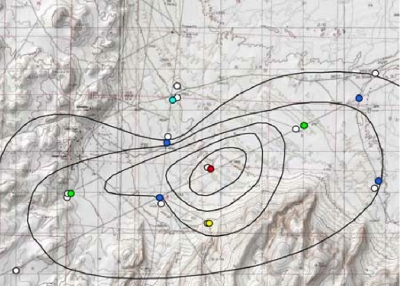 Desert Queen – All 2m data points (and temperature gradient wells.) As you can see, the 9 data point model badly misconstrued the size and shape of the potential resource. The contour lines are 1 degree C differences and at 2m the delta T between “background” and “hot” was greater than 20 degrees C. 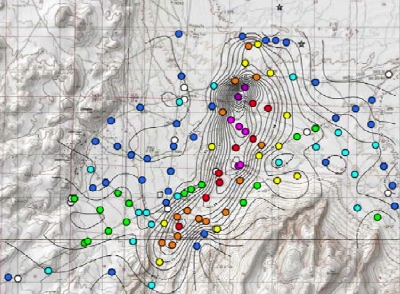 This particular approach does have limitations in that shallow aquifers or wet ground will impede the accuracy of the method, but considering the vast majority of geothermically active area in the US is located in arid climates, this isn’t such a barrier to use. Of course, the most effective way (and only way) to truly qualify a resource is through drilling and flow testing of the geothermal resource. At present, drill rig rental runs around $22,500 per DAY – without the crew and that’s if you can even find a rig to rent. It’s an expensive undertaking to be sure. But a simple, relatively cheap, and relatively fast way to profile a large area is using this shallow temperature approach. It seems to work and should be a valuable tool in the geothermal prospector’s portfolio.

The summary is that there are many methods to find “blind” resource and we’re constantly getting better at it. Another question is, who is actually looking for such resources? The only answer I can provide at present is virtually no one.


If you liked this entry, Digg It!
Tune: In the Mood by The Glenn Miller Orchestra
Technorati Tags: Discovery | Blind | Geothermal | Mike Harding Blog


« Just how much geothermal potential is in the US?
» Ecologically sound network hosting