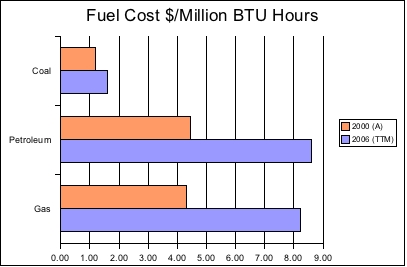 As you can see from the graph above, fuel prices have increased rather dramatically for petroleum and natural gas over the past 6 years. It is worth noting that the 2000 numbers are actual average prices (A) and the 2006 numbers are a trailing twelve month average (TTM.) Even coal, not known for price volatility has increased in price 35% during this time period. Petroleum and gas have increased 95% and 91% respectively in the same time period. As previously noted in this entry, coal, petroleum, and gas accounted for 72% of electric power generation in 2005 with coal accounting for the large majority of generation. Gas accounts for 19% of total generation, up 84% from 1992. Petroleum accounts for 3% of generation.

A fair question would be, what has happened to retail prices of electricity during this same period? 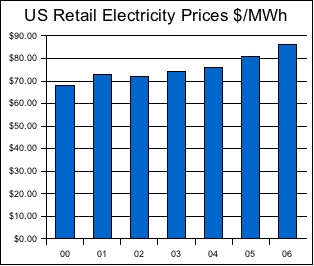 As you can see, retail prices have increased during this same time period, but not close to the rate of increase of fossil fuel cost. Does this mean electric generation companies are going out of business? Rising costs without a commensurate increase in end product cost tends to affect profit in a negative way. One thing is certain, it will be challenging to maintain a competitive business model when fuel costs are a major component of the cost of goods sold. Couple that with increasing regulatory pressures over emissions from oxidizing such fuels setup an interesting challenge for the power generation industry.