Do you think, over the next 10 years, that US electricity consumption will increase or decrease?

An interesting question, there are constant conservation programs and there is ever improving technology (like Sun’s Ultra T1 processor,) but do you think that’s enough to offset any increase in demand?

Sometimes a historical look can be illuminating when attempting to answer these sorts of questions. The chart below shows in Petawatt hours (a petawatt is 1,000,000,000,000,000 watts) how electricity production has grown since 1992 in the US. For our international readers, I apologize, I’m not taking a global position on this, only a US-centric position. Well, frankly, because I live here and it’s big enough to be undigestable with the US alone. Notice that there is an aggregate increase of nearly a petawatt hour in the amount of electricity consumed over the past 13 years. 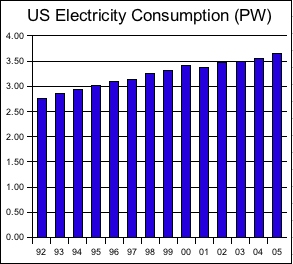 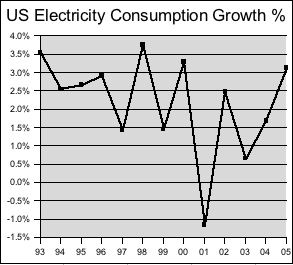 Returning to the questions above, will demand for electricity increase or decrease and what, if any impact with conservation and technology have on the trend? I believe we’ll continue to see an increase in demand. Even a fraction of a % of growth in demand spurs the need for more energy generation. And that’s interesting.