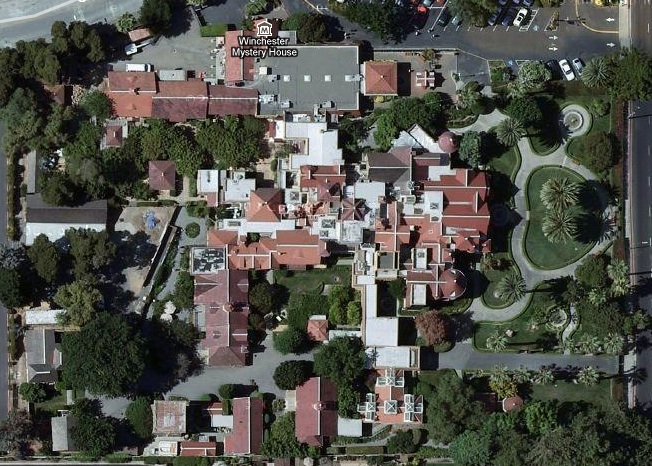 It occurred to me yesterday that I’ve lived in the Bay Area for nearly 20 years (tough to believe, but true) and I had never visited the Winchester Mystery House in San Jose. So, we bundled the girls into the truck and off we went to the south bay in search of adventure.

For those of you who don’t know, the Winchester Mystery House is billed as a large mansion with many oddities, curiosities, peculiarities, and gasp, ghosts! What we found was less exciting, a tourist trap (and an expensive one at that, $72 for three tickets) that was really, at least I thought, sad.

The story starts with Sarah Winchester nee Pardee, widow to William Winchester of rifle fame. After having her only child die as an infant from a wasting disease and her husband some time later from tuberculosis, the story goes she visited at “medium” in Boston who indicated her child and husband were taken by the spirits of all those killed by Winchester rifles. In order to keep the spirits at bay, she should “go west,” find a home, and keep building continuously and as long as that happened, she would live in peace.

Mrs. Winchester had inherited $20M and control of the Winchester Repeating Arms Company from which she earned some estimated $1,000 a day. This is 1884, so that’s real money for the time. Taking the medium’s advice, she struck out for the west and ended up in San Jose where she bought a 160 acre fruit farm with an 8 room home, a barn, water tower, and other supporting buildings.

After she took possession of the property, construction began, and continued 24/7 until September 5, 1922 with Mrs. Winchester’s death. The result of 38 years of construction was a 24,000 square foot home with 160 rooms, 2,000 doors, who knows how many windows, three elevators, multiple kitchens, a seance room, and multiples of 13 and 7 everywhere with occult symbols like the spider web appearing in Tiffany leaded glass windows throughout the property. There are doors, windows, and cabinets that open onto walls, a stairway to nowhere, and many, many other inexplicable features in this property. While it certainly has some interesting aspects, it’s no Hearst Castle or Biltmore House.

Mrs. Winchester employed nearly 30 people full-time as her house staff paying them $3 a day, each day in cash, so she could simply say “Don’t show up tomorrow” to those who displeased her. This was 2x the normal daily wage so she never had a lack of willing talent to choose from. The prevailing theories about the home, completely designed by Mrs. Winchester are, bad design as the first and trying to confuse the spirits of the dead as the second. After walking through the property, my theory is she was nutty as a fruit cake and had the financial wherewithal to create a physical expression of her mental illness.

In fact, the only real mystery around the house is who the owners are now. Even that’s not much of a corker, Winchester Investments, LLC is the registered owner and Gerard Raney and Ray K. Farris and their families are the names associated with the company according to multiple sources in the public domain. The tour guide simply answered my question with “local families who like their privacy.” The grounds are now a little over 4 acres with beautiful gardens, a cafe, gift shop, arcade, picnic area, and private meeting rooms.

While it was intended to be spooky and scary, mostly I just left feeling sad that this woman was so tortured that she lived her life in such a manner due to complete and utter bullshit. What a waste. And how sad.