« Lady Washington is in the Harbor
» Detroit Dilemma

On April 7, 2007 I wrote this entry, given the news out of Detroit, I thought I’d dust it off and post it again. Mr. Kerkorian did not buy Chrysler, and I bet he’s happy.

Earlier this week there was news that Kirk Kerkorian made a $4.5B cash bid for Chrysler. Must be nice to have that much change lying around…

But to get to the point of this post, it is Easter weekend and for a couple of billion people around the globe, that means celebrating the resurrection of Jesus (or, something to do with rabbits laying colorful eggs and various chocolate treats.) But I digress. Let’s assume Kerkorian gets Chrysler from the good folks at Daimler, what should he do with it?

Like all American auto makers, it has a fleet of non-competitive vehicles, which coupled with rising fuel costs, is simply hammering sales. I snagged the graph below from the film An Inconvenient Truth, unfortunately, Chrysler’s market cap wasn’t on the slide since it is a subsidiary company. 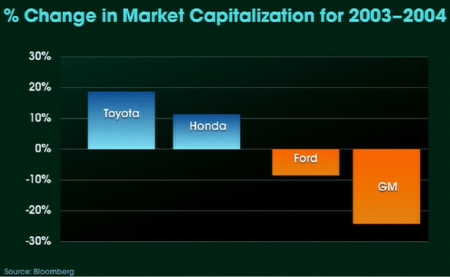 It doesn’t take a Wall Street expert to interpret this chart. Fuel efficient vehicles are winning, and winning big. Last week, Toyota announced that it sold 28,453 hybrid vehicles in March. More than all of Saturn, GM’s fastest growing brand. This is not a temporary shift, it is permanent, inexorable, and accelerating.

As Easter suggests, sometimes things need to die before they can be resurrected and come back even stronger. I think that’s where the US Auto Industry is, it’s clearly dying because it is incapable of change.

Mr. Kerkorian, here’s the challenge: Don’t use half-measures, don’t compromise with hybrids. Crucify the gasoline and diesel engine. The 640hp Electric Mini project has already proved this is possible. Take the bold step forward to launch the following all electric vehicles from Chrysler:

Don’t get cute with this stuff, no distinctive designs, no hybrid systems, keep the range over 250 miles (400km,) and engineer the systems to use 4 motors, one on each wheel. Use your existing designs, rip the combustion engines, emissions equipment, and transmissions out and replace them with deep cycle batteries, 4 wheel mounted motors, and a 100 foot (30m) retractable extension cord. Engineer the power system to have the right performance characteristics: i.e., good low-end torque on the truck and fast acceleration on the passenger vehicles.

Get to market next year. It’s possible. What do you lose? The old market. The long haul market. But, do you care? Chrysler has lost, or is rapidly losing those markets anyway. Use your brand, your dealer network, and your manufacturing and distribution infrastructure to make this happen and to make it happen fast. And if Chrysler ultimately dies as a result of this decision? At least it went out swinging. And hey, you’re worth $15B now, you’ve still got $10B left.

This is not the time for half-measures, it’s the time for bold leadership. We’re closing factories and shipping work offshore, we’re sending billions into the middle east to fund terror each time we fill our gas tank, the temperature of the earth is quickly rising as a result of greenhouse gases. We’re facing a crisis on multiple dimensions.

The question is, will you?


« Lady Washington is in the Harbor
» Detroit Dilemma