« The End of an Era
» Football Content at Buckeye.vu

Why Detroit is Dying 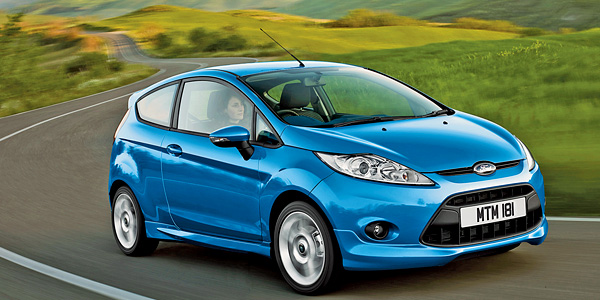 Attribution: Business Week
This article in Business Week came across my RSS reader this morning. I read it, and decided to simply post it here in it’s entirety with a link back to Business Week. (Kudos to BW for the story, but shame on you for not hitting the punchline, which I will do below.)


If ever there was a car made for the times, this would seem to be it: a sporty subcompact that seats five, offers a navigation system, and gets a whopping 65 miles to the gallon. Oh yes, and the car is made by Ford Motor (F), known widely for lumbering gas hogs.

Ford’s 2009 Fiesta ECOnetic goes on sale in November. But here’s the catch: Despite the car’s potential to transform Ford’s image and help it compete with Toyota Motor (TM) and Honda Motor (HMC) in its home market, the company will sell the little fuel sipper only in Europe. “We know it’s an awesome vehicle,” says Ford America President Mark Fields. “But there are business reasons why we can’t sell it in the U.S.” The main one: The Fiesta ECOnetic runs on diesel.

Automakers such as Volkswagen (VLKAY) and Mercedes-Benz (DAI) have predicted for years that a technology called “clean diesel” would overcome many Americans’ antipathy to a fuel still often thought of as the smelly stuff that powers tractor trailers. Diesel vehicles now hitting the market with pollution-fighting technology are as clean or cleaner than gasoline and at least 30% more fuel-efficient.

Yet while half of all cars sold in Europe last year ran on diesel, the U.S. market remains relatively unfriendly to the fuel. Taxes aimed at commercial trucks mean diesel costs anywhere from 40 cents to $1 more per gallon than gasoline. Add to this the success of the Toyota Prius, and you can see why only 3% of cars in the U.S. use diesel. “Americans see hybrids as the darling,” says Global Insight auto analyst Philip Gott, “and diesel as old-tech.”

None of this is stopping European and Japanese automakers, which are betting they can jump-start the U.S. market with new diesel models. Mercedes-Benz by next year will have three cars it markets as “BlueTec.” Even Nissan (NSANY) and Honda, which long opposed building diesel cars in Europe, plan to introduce them in the U.S. in 2010. But Ford, whose Fiesta ECOnetic compares favorably with European diesels, can’t make a business case for bringing the car to the U.S.

TOO PRICEY TO IMPORT

First of all, the engines are built in Britain, so labor costs are high. Plus the pound remains stronger than the greenback. At prevailing exchange rates, the Fiesta ECOnetic would sell for about $25,700 in the U.S. By contrast, the Prius typically goes for about $24,000. A $1,300 tax deduction available to buyers of new diesel cars could bring the price of the Fiesta to around $24,400. But Ford doesn’t believe it could charge enough to make money on an imported ECOnetic.

Ford plans to make a gas-powered version of the Fiesta in Mexico for the U.S. So why not manufacture diesel engines there, too? Building a plant would cost at least $350 million at a time when Ford has been burning through more than $1 billion a month in cash reserves. Besides, the automaker would have to produce at least 350,000 engines a year to make such a venture profitable. “We just don’t think North and South America would buy that many diesel cars,” says Fields.

The question, of course, is whether the U.S. ever will embrace diesel fuel and allow automakers to achieve sufficient scale to make money on such vehicles. California certified VW and Mercedes diesel cars earlier this year, after a four-year ban. James N. Hall, of auto researcher 293 Analysts, says that bellwether state and the Northeast remain “hostile to diesel.” But the risk to Ford is that the fuel takes off, and the carmaker finds itself playing catch-up—despite having a serious diesel contender in its arsenal.

Business is risky. To change the rules of the game, the players have to be willing to take risks – Detroit is dying because of “business reasons” – those are not that diesel is unpopular and engine import is too expensive, it’s because the executives (read captains of multiple Titanics all sinking fast) are yellow-bellied, spineless, empty suits who are afraid of their own shadows. They clearly don’t see that if they keep doing the things they’ve done in the past 20 years, there is no future for US auto manufacturers. They’re taking half-measures and have no goal or vision but to hold on to what they’ve got. If one of the big 3 were to say “Our mission is to provide cost-effective, sustainable, clean transportation to the masses” and then align their prodigious resources toward achieving that goal, they would clean up economically. Why are they blind to this? Why are they scared to take the leap? They are failing already, what is there to lose?

The question is, why are these morons still leading some of the largest companies in America? Go to the street, ask a random person, would you like to get 65 mpg in your car? I think we all know the answer to that one…This kind of willful stupidity simply makes me crazy!


« The End of an Era
» Football Content at Buckeye.vu