« It’s going to be an interesting campaign…
» Enjoy the Holiday! 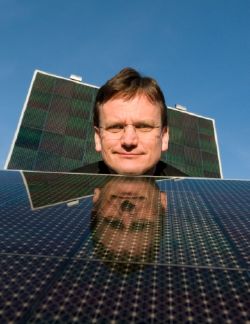 Last week, much ink (pun intended) was spilled regarding Nanosolar’s announcements regarding their new printed solar cell technology. The first 3 panels were presented one to stay at company HQ, one to the San Jose tech museum, and one to be auctioned by eBay (not!, read the blog on that story…)

We’ve been a bit bearish on photovoltaic solar for two primary reasons: cost and capacity. If the breakthroughs claimed by Nanosolar prove out in practice (there is precious little technical information available about the printed solar cells performance) then it’s possible the cost aspect of our bearish outlook has been cracked. The pricing places these panels in the capital cost class of plain coal (as opposed to “clean coal”) and natural gas fired technologies. That is significant.

The capacity aspect is still problematic, here in North America around 40 degrees north, one can expect an average capacity factor in a good solar location to come out at 24%; peaking at ~36% in the summer and bottoming out at ~12% in the winter. When looking at solar relative to fossil fuels, hydro, nuclear, and geothermal, all baseload technologies, this aspect is still a barrier. However, at the new price point, the major advantage solar pv has is in small, distributed installations which are impractical for the baseload technologies and that advantage can now be maximized.

The missing link is the technical details. State-of-the-art pv loses around 1% efficiency per year of use, is that true of Nanosolar? What is the conversion efficiency? Silicon-based pv cells have gone north of 40% in the lab and are commercially available around ~20%. Thin film cells check in around 10%. Based on what has been disclosed about the technology it’s likely to be closer to thin film than silicon in efficiency. Until these details become clear and the breakthrough can be judged publicly against known technology, it’s exciting potential. We’ll be anxiously waiting to see the details.


« It’s going to be an interesting campaign…
» Enjoy the Holiday!