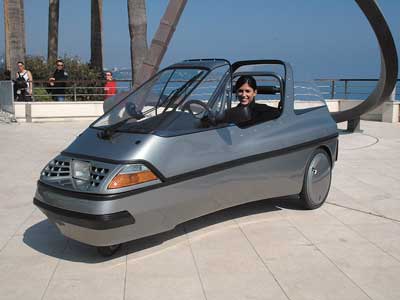 Keeping with the air theme established this week, here’s yet another approach to the air powered propulsion potential. French company, K’AirMobiles has proposed a new class of vehicle, the VPP or vehicles with pneumatic propulsion class. This would include full-fledged cars like ZPM’s from earlier in the week, EngineAir’s runabouts, and indeed, these glorified bicycles with air tanks and engines.

If the technical specifications are correct on the website, this could be a very attractive local option. The CityEl version is a 3 seater with a top speed of 40kph. The range is represented as 40-80km, which is more than enough for a runabout. The useful load is spec’d out at 240kg. What likely isn’t attractive is the survivability in such a vehicle upon catastrophic impact. Still, an interesting approach.

This entry was posted on Thursday, March 20th, 2008 at 6:00 am and is filed under Transportation.