Archive for the 'Research' Category 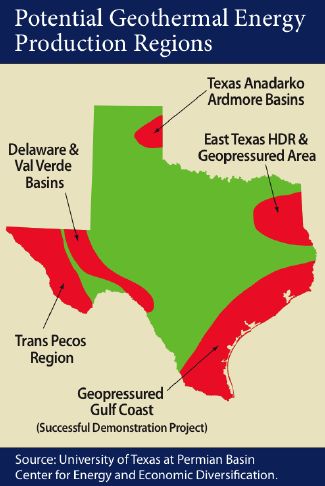 Susan Combs, the Texas Comptroller of Public Accounts, has recently released a comprehensive report on energy in the state of Texas. The 33 chapter report is extensive and fact-based, covering virtually every energy source one can think of, fossil-based, renewable, and experimental. It’s really a fantastic bit of research.

Why does Texas care so much about energy? The answer is pretty simple, the average Texan consumes 3x as much energy per capita as the average US citizen and a large segment of Texas GDP is derived from energy related business. Those two facts mean that Texas suffers disproportionately as the price of energy rises but it also means that Texas has a potential advantage since it has a workforce that understands the energy business.

Chapter 21 has to do with the geothermal potential of Texas (see the map at the right) and covers co-generation as a consequence of oil/gas production, enhanced geothermal systems, and geothermal heat pumps. On the co-generation side alone, the report speculates that over 2,000MWe of production may be available. In the 1980s a 1MW co-generation test was run producing over 3,000MWh of power, but it was discontinued due to being non-cost competitive. While there are no active geothermal projects in Texas, recently leases on 11,000 acres have been granted generating over $50,000 in revenue for the state.

Of all the impact geothermal technologies could have in Texas, the most cost effective and most likely implementation is of geothermal heat pumps. A technology that effectively moves heat from the air to the ground and vice-versa. Particularly in the sweltering summer months, a GHP system could serve as a relatively inexpensive way to keep people cool as energy prices rise.

What’s in a Name?

If you think that this entry will be about literature, you’ll be disappointed. It’s about the noise being generated right now around various thermodynamic cycles where heat is converted to work. Recently we’ve seen an upswell of interest in the Kalina Cycle harvest method and a number of companies have been chartered and funded to produce harvest systems for a variety of heat sources (like Exorka and Kalex.)

But just what is Kalina Cycle? Before we answer that, we need to take a look at basic Rankine Cycle (or sometimes called Carnot Cycle) harvest. It is a 4 stage process by which a working fluid is pressurized, heated to prompt phase change from liquid to gas, expanded through a harvest device (typically a turbine,) and then condensed. The cycle is closed loop in nature and forms the basis for virtually all electricity generation involving heat (geothermal, solar thermal, natural gas, coal, and nuclear – for the US, that’s 90+% of generation.) 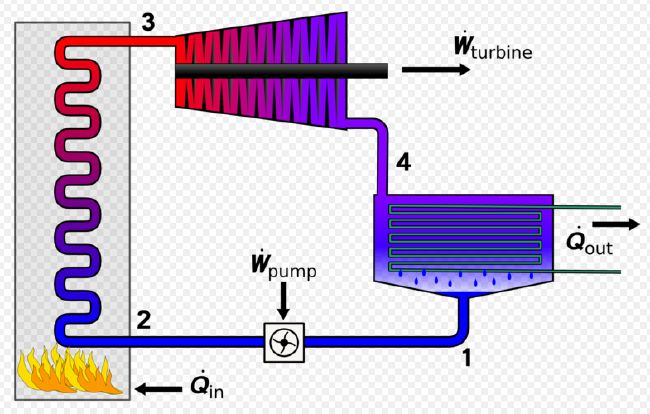 A variation on theme is Organic Rankine Cycle which follows the same process as Rankine Cycle with the principal difference being the composition of the working fluid. In straight RC the working fluid is most often water. In ORC the working fluid tends to be a stable compound with a relatively low boiling point (i.e. isobutane or isopentane.) This is less efficient than RC but can harvest energy from heat sources from 75-150C where RC requires 250C and higher temperatures to function well.

Thus we come to Kalina Cycle, really a variation on ORC (and thus RC.) It was proposed by Alexander Kalina about 20 years ago. KC follows the same process as RC, but again changes the composition of the working fluid from a single stable compound with a low boiling point to a two part working fluid (most often ammonia/water mixture) which can, under certain circumstances, increase the efficiency of ORC harvest of relatively low temperature resources.

Of the 3 related conversion cycles, RC and ORC are in wide use today. Kalina Cycle is still gaining steam, so to speak.

Sorry to do this two days in a row, but Renewable Energy Access is on a roll. Today’s great content revolves around rebuilding the electrical grid.

In 1957, as Eisenhower began his second term as U.S. President, the first satellite launched into orbit and the first commercial nuclear reactor came online, electrical workers all over the country were installing the world’s most advanced transmission and distribution (T&D) system. Today, much of that T&D system installed 50 years ago remains in place, holding together a patchwork grid for ever-expanding electricity markets.

“You have to think much more distributed than centralized, you have to solve the problem of storing energy, and it has to be much more like an internet system than the current grid is today in order to be effective.”

Now in 2007 â€“ the age of the internet, personal digital media and distributed energy â€” the grid has failed to keep pace with the rapidly changing technological landscape. While most industries rely on technologies that have been invented or updated in the last few years, the electricity delivery industry uses technologies that have more or less stayed the same for 100 years.

There’s a common idiom that goes, â€œif it ain’t broke don’t fix it.â€ While the grid in the U.S. is hardly broken, it is beginning to deteriorate rapidly in some places, and it will need some serious repairs in order to meet the growing demand for electricity in general and distributed renewable electricity specifically.

â€œWe need to see a very substantial transformation of the system,â€ says David Meyer, Senior Policy Advisor in the Office of Electricity Delivery and Energy Reliability at the U.S. Department of Energy (DOE). â€œWe’re outgrowing it in many parts of the nation. It’s certainly not the high-capacity, integrated and smart system that we need.â€

The current grid is a stiff arrangement of one-way transmission lines, centralized generation facilities and aging substations. The recent emergence of large amounts of renewable electricity in markets around the country are creating new challenges for both the transmission and distribution sectors.

As we pursue our project, we’ve found that we needed high resolution aerial imaging to kick off the process. There are many companies out there that provide these services, but we chose GlobeXplorer due to instant delivery, product selection, price, and image quality. If you’re looking for aerial photographs, give them a try.

Sample of our Sou Hills Prospect (Click to enlarge) 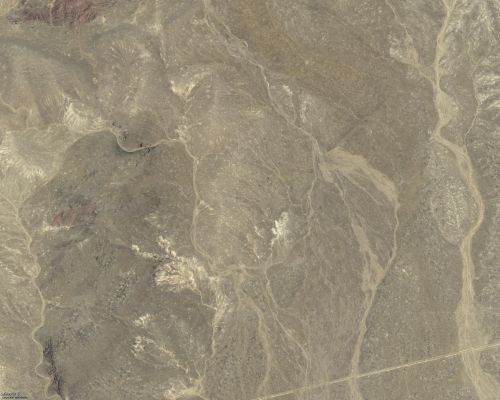 Renewable Energy is “not green”

According to Jesse Ausubel, a researcher at the Rockefeller University in New York, commenting on a recent study they completed: â€œWe looked at the different major alternatives for renewable energies and we measured output for each of them and how much land it will rape.â€ Since July 24 when Live Science reported on this study and interviewed Ausubel, this story has been seized by those who are invested in maintaining the status quo and increasing investment in nuclear power.

We tend to agree with Gregory A. Keoleian, co-Director for the Center for Sustainable Systems at the University of Michigan. He thinks more in-depth analyses are needed before dismissing renewables and considering nuclear power as a viable option.

I think the characterizations made that â€˜renewables are not greenâ€™ and â€˜nuclear is greenâ€™ sound provocative, but they do not accurately represent these technologies with respect to a comprehensive set of sustainability criteria and analysis,â€ Keoleian told LiveScience. â€œThe treatment of renewable technologies [in this study] is shallow and the coverage of the nuclear fuel cycle is incomplete.

While this “study” is at best a specious attack piece for special interests, it does bring to the forefront of the renewable energy discussion a few key topics that we would all do well to remember: