Archive for the 'Biomass' Category 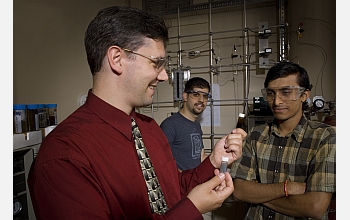 The holy grail of biofuels has been to find a feedstock that doesn’t compete with food (i.e., corn), produce a product that is compatible with existing infrastructure and has great performance, and to discover a low-impact/energy process to produce the product.

University of Massachusetts (Amherst) BioChemist, Dr. George Huber and his graduate students, Torren Carlson and Tushar Vispute, may have grasped the grail with their switchgrass gas. A process that makes not ethanol, but actual gasoline compounds by combining the cellulose with certain catalysts in the presence of heat to produce the precursors to gasoline and then to run a series of steps that further refines these compounds into gasoline, effectively indistinguishable from the petroleum based fuel used today.

While many years from appearing at the pump, this breakthrough has the possibility of transforming the inefficient and increasingly controversial biofuels segment into something completely different.

Last week Ormat announced a solid quarter with revenues $79.5M, up 2% Y/Y and earnings of $15.8M up 13% Y/Y. Details of the earnings announcement are available in this press release. Dita Bronicki reaffirmed guidance for the year and the quarter and the stock has responded well in the market place. For the year, Ormat is on track to deliver $280M in revenue and around $55M in earnings for 2007.

The equipment business continued to be “lumpy” showing a decrease of 15.8% Y/Y – while the recovered heat product wins seem to be coming in, increased competition in the geothermal heat conversion business could be starting to have an impact. Also, a number of developers we have contact with are not inclined to select Ormat equipment for their projects due to the competitive relationship (some have used the word “predatory”) Ormat has fostered with developers. This bears watching closely, though the electricity segment continues its growth generally as predicted.

A secondary offering of 3.3M shares raised $155M in this quarter, though it is not reflected in the results. This money will be used to further advance the development of new power plants. Also, it is rumored, though not reported that the company may have realized positive results from one of its drilling and exploration programs in Nevada. 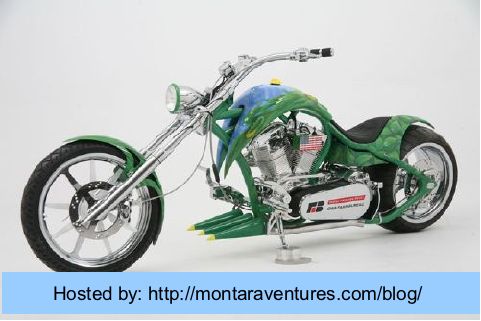 The Iowa Farm Bureau and Orange County Choppers have teamed up to build this great looking bike to increase ethanol awareness. It’s a great message, you don’t have to be a tech-weenie to be able to have a cool vehicle that also has a little lighter footprint on the planet. This plus what Tesla is doing on the electric vehicle front should help to start change the perceptions that your only choice is to drive a dorky looking, efficient car.

The drawing is tomorrow, September 7, so there’s still time to buy that ticket (if you can get to Iowa.) An aside: MeV owns an E85 vehicle, we can attest that the fuel works great. As a California company, it is disappointing as there are only 4 gas stations with E85 in the whole state.

Glitnir to invest $1B in geothermal

Iceland’s Glitnir Bank released a report today on the booming geothermal market in the U.S., and it intends to be a part of it.

The bank, which opened its first U.S. office in New York today, said it plans to invest $1 billion in U.S. geothermal energy projects over the next five years.

“The challenges are numerous, but the potential is huge,” Arni Magnusson, managing director of sustainable energy for Glitnir, told a press conference today.

In its report, Glitnir predicts a more than six-fold increase in the annual sales of electricity from geothermal sources in the United States to $11 billion in 2025, up from $1.8 billion now.

The report said geothermal energy could fill up to 20 percent of California’s electricity needs, 60 percent of Nevada’s and 30 percent of Hawaii’s.

Glitnir is no stranger to geothermal, with 90 percent of all houses in Iceland being heated geothermally.

With over 150 delivery trucks (lorries if you prefer,) McDonalds consumes over 6 million litres of diesel fuel each year. That many people have been asking the restaurant (and others) for their used cooking oil has not gone unnoticed and as a result, McDonalds UK plans to use a mix of 85% recycled cooking oil and 15% rafeseed oil to power their fleet.

At the beginning of this month, a subset of 50 trucks was converted to run on the bio fuel and the full fleet should be converted shortly. From a financial perspective, this is great news for the company as they could realize savings of up to $12M per year in fuel costs and potentially have excess fuel to resell providing even more bottom line boost. Reuters published an interesting writeup on this earlier in the month.

Another case where recycling and smart ecological thought translates to positive cashflow.