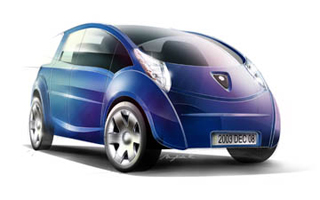 Zero Pollution Motors is designing a set of air powered cars for release in the US. That’s right, these vehicles use compressed air (and at speeds over 35mph, small amounts of fuel mixed with compressed air) to power a 6 seat vehicle over 800 miles on 8 gallons of fuel plus the compressed air. The air is stored in on-board carbon fiber tanks that have the tendency to rip rather than explode on impact. This is important as the pressure being held in each vessel is in excess of 300 bar. Wow. That’s going to be tough to handle!

ZPM has been garnering a bunch of press lately on the heels of their recent announcement with Tata Motors of India. An interesting concept to be sure.