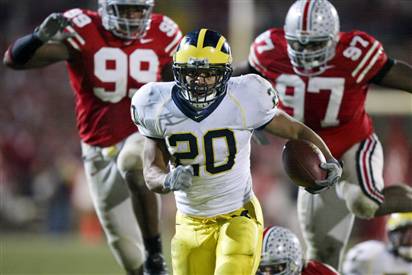 I woke up this morning with a very similar image to this in my mind. After last week’s run defense collapse and the fact that Hart didn’t play much in the past few weeks I guess is leading me to wonder if he is really as injured as people think and wonder if the code has been cracked on running against the OSU Defense. Guess we’ll find out in a few hours, but the scene above is not one I wish to witness later today…

I sincerely hope that Michigan is tight with all the expectations they’ve heaped upon themselves, I hope that whoever the Michigan quarterback is spends a fair amount of time running for his life from defenders, and I hope that the Michigan secondary play looks like it did against Oregon. That, coupled with a win, would be a sweet day! GO BUCKS! Tweet