The chart below was taken from the Update on World Geothermal Development issued by the GEA today. 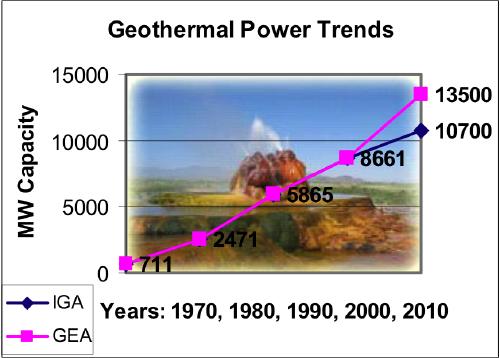 According to the assessment, the number of countries producing power from geothermal resources could increase 120%, from 21 countries in 2000 to as many as 46 countries in 2010. Total geothermal capacity online could increase over 55%, from 8661 MW in 2000 to 13,500 MW or more in 2010. The report states, iÌ€The trends in both the number of new countries developing geothermal energy and the total of new megawatts of power capacity under development reverse slowdowns in international markets seen in the late 1990s, and approximate trends seen in the more robust 1980s.iÌ‚

Reports examining the international status of geothermal development were published by the GEA and the International Geothermal Association (IGA) in 2005. While additional detailed reports are expected to be prepared for the next World Geothermal Congress (WGC), this interim report examines the progress in international geothermal power development since 2005, GEA explains. The new Interim Report notes projects under development, major political and/or policy initiative related to development, and plans announced by either governments or in-country parties.

The report notes that iÌ€in numerous casesOÌˆthe success of development in a country is linked to government policies and initiatives. The extent of future geothermal project development depends more upon adequate funding and sustained policy support than
geologic factors.

The report is available on-line at: https://www.geo-energy.org/publications/reports.asp, or you can email: research@geo-energy.org and request a copy.

Highlights of the report:

â€¢ The World Bank is expected to approve funding for the ARGeo project in November –a Risk Mitigation Fund of $17.75M USD. This fund is key to the development of potentially thousands of megawatts of new geothermal power in Kenya, Ethiopia, Djibouti, Uganda, Tanzania and Rwanda.

â€¢ Germany is looking at over 100 sites of geothermal potential, and is looking to have as much as 200 MW online in several years.

This is encouraging to see that geothermal resources are being developed globally, though we wish we’d see more momentum on this renewable in the US. With the lack of funding on the R&D side, it’s unlikely large-scale HDR projects will be undertaken in the US anytime in the near future limiting projects to hydrothermal systems in the foreseeable future.